Virtualization explained in an easy way

Companies use different IT programs and services. A medium size company could have:

If all four services ran on the same computer (or server) the same problems that we often encounter on our own PC would arise: if I start a program that needs lots of resources, all other programs are slowed down. Sometimes, my computer freezes if I have too many programs opened at the same time. A company cannot allow itself to have its services frozen.

A server with different programs running on it 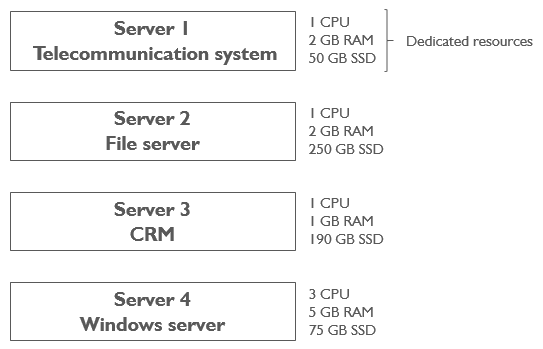 With four different well chosen servers, I can be sure that each program has enough resources to work properly and that those resources are not shared. Each program is independent from the others and this offers a few advantages:

Using a dedicated machine for a specific program is an easy way to split the resources and to allocate enough for each program. However, in most cases, using a whole server for only one application is oversized and the initial investment as well as the running costs are much too high. There are other cons to using one server per program:

To sum up we can say that services run better and more securely when they are installed on different servers but using only one server is cheaper and easier to manage and maintain. Virtualization is a good compromise: it brings the pros of both solutions without the cons.

In a virtualized environment, the four computers are running within one server:

4 programs virtualized on one server

Virtualization means running different imaginary (virtual) computers on one real server: the programs do not see the difference between a real and a virtual computer. When the machines are virtualized it brings the same advantages as having one computer per machine, but on one server only: it is cheaper and needs less power. Virtual machines are also like boxes within a server. It is very easy to back them up and restore them on another server. 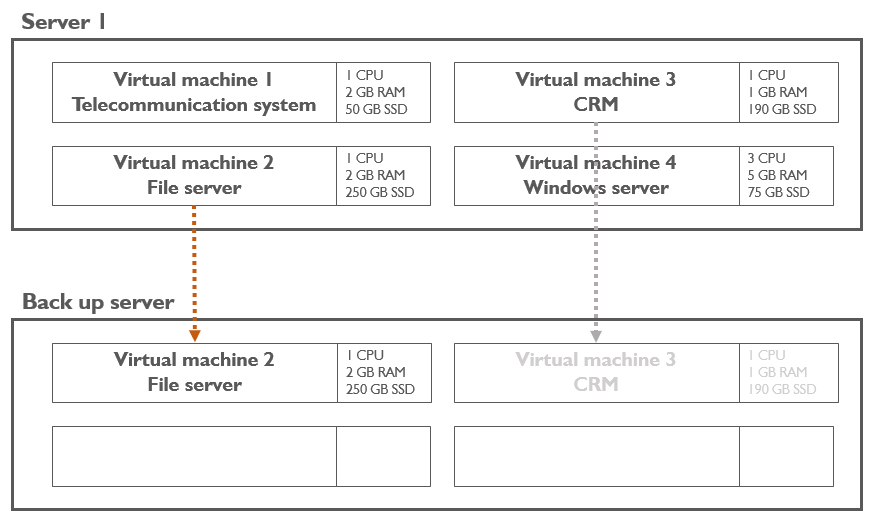 Back up of virtual machines on a backup server

Finally a "virtual" machine is not real, which brings lots of flexibility: the user can define the perfect amount of resources needed to run the program and modify them later if needed. The user can also choose the best virtual hardware (network card, SSD, RAM, etc.) that composes the virtual machine in order to meet the exact needs of each program.

This is for all those reasons that we offer virtualization possibilities on the beroNet Appliance.